Much of my life has been pre- determined by the neurological disease Spino Cerebellar Ataxia. My professional and personal life was been impacted by this situation. Only 36 years of my life had any sense of normalcy and routine. From child prodigy in Broadway musicals to classical music studies. On to an operatic career and theater / cultural management. A pioneer in hospice care and charity director on the Costa Blanca – Spain. Then on to new projects as a solution project seeker ! ( see the website biography )

All of these endeavors have been impacted along the way by the progression of the neurological disease Ataxia. But nothing has added more satisfaction than the knowledge that the impact of my efforts with the Solution Project and my website in 2020 has affected many people in a very productive way.

Now at 70 years old much has developed in the research of Ataxia and the Spino Cerebellar Ataxia types. Since the timeline of my Grandmother and my battle with this disability – much has changed ( for the good) in the research area. Genetic studies and treatments have advanced the understanding of Ataxia and how we can cope with this neurological disorder on a daily basis. But there is still no cure! We will see what the future holds.

On July 17 th, 2015 – Ataxia took away the one last function that I loved and still allowed me to do – DRIVE! My license ran out and I was put in the unfortunate situation of having to declare any deficiencies with co-ordination due to Ataxia. So naturally any renewal of my driving license was in peril. Driving was out of the question!

This meant that my abilities regarding driving were under scrutiny. This also limited my sphere of travel. The only function I could do was to ride and manage my electric scooter. The limitations affected my shopping and restaurants. Thank God – technology has created a small lightweight scooter that can be stored in the back of a car. I had to live with my limitations. No more DRIVING!

What is olivopontocerebellar atrophy Ataxia?

But neurologist still cannot categorize it. There is only occupational therapy available for the progression of balance, gait, mobility and speech. No cure is known !

There is more to add to the olivopontocerebellar atrophy story than we ever thought. The NORD database made it possible for this information to be available. Only since 2012 can researchers pinpoint to similarities of OPCA to a very rare form of cerebellar ataxia. This form is called Multiple System Atrophy. The recessive gene is passed down with 50% certainty with every pregnancy. Most people are affected by the time they are in their 30’s. All women affected are made aware of the hereditary possibilities of having children. But like most people affected with MSA / olivoponto-atrophy there is no known treatment or cure for this disease.

GET TESTED TODAY! – STOP THE GENE !

If we had all ( 3-4 generations ago )the genetic research and information we have today – much heartache and suffering could have been avoided. The genetic testing we have now gives everyone the power to remove the genetic disposition we have to Spino Cerebella Ataxia type 2 & 6. – and eventually the dominoes for the other Ataxia types, with researchers , will begin to fall !

So , if you are thinking of having children – become a game changer ! You can stop Ataxia for generations to come. Eliminate the CACN1A Gene ! Please get in touch with the CACN1A Foundation . They can help you to stop this vicious cycle.

My family, mainly on my moms side, goes back with Ataxia to the early 1900’s of my grandmother. My mother and other aunts and cousins new something was wrong with their balance, speech and motor coordination. But what exactly it was – neurological doctors couldn’t say. Generations of Ataxia research was just being developed.

Only as of myself and my sister in the 1980’s was anything really known about Ataxia. My father kept assuring us that his good genes would offset those of my mother. Little did he know then that he was carrying the gene in him that shows Ataxia has been passed on with a 50% chance. Both I and my sister have been affected by the Ataxia disease.

My sister unfortunately has a girl and a boy. Time will tell if they too are affected by the neurological disease. I on the other hand chose not to have children. Hopefully with me this is where the buck stops! But research still has a ways to go.

A dream is shattered!

My dream of singing was to be a means of making my life independent. The many years of musical and vocal studies now had to be replaced. Once a consummate musician with sport like physical attributes , was all being attacked by the disease of hereditary cerebellar Ataxia.

My precision of articulation was affected by the onset of disarthia and disphonia. I was now “behind “ the musical beat! Rolling an “ R” in the Italian text was impossible to produce. Passages requiring rapid articulation were hampered. The technologies of the opera house stage were moving beyond what my progressive Ataxia could cope with. I couldn’t stand without falling. Moving parts of the operatic stage and raked slopes were becoming increasingly more difficult to cope with. Imagine being told by a stage director that I was a threat to others on stage!

My dreams of singing some of the Mezzo Sopranos greatest roles of R.Wagner, R. Strauss and G. Verdi were lost forever. But my love for the music remains!

The Hospice Dream – Talking My Story Up

In the years n Spain I was founder and the inspiration behind the Sweet Charity Hospice Fund. This was in the time of 2004-2008 . This time gave me the experience of speaking to and with thousands of people about my Hospice Services dream and my own personal story! I presented this idea to groups, on t.v. and radio. I was becoming the face and voice behind the Hospice Dream for the Costa Blanca Spain.

Working on this hospice project gave me the chance to deliver a necessary service of home nursing care for the elderly on the Costa Blanca Spain. The Angel Nursing Network was created to started in collaboration with local hospitals, family counseling services and clergy alongside of our campaign to build a standing Hospice.

The Sweet Charity Hospice Fund needed a strong message and expertise in salesmanship in 2004 on the Costa Blanca. I had the necessary British community behind me. The colonial British mentality about the views of running a charity mixed with Spanish protocols and my American energy – just didn’t gel together. My personal qualities to get this dream off the ground and make it a reality were acknowledged but not fully accepted or encouraged by some people.

Running any business, especially a charity, requires many helpers , exact Spanish protocol and an astute business and financial background. The concept of a standing Hospice was a totally British thing ! Still, I managed to get many people on board. Even the Spanish families supported my efforts. By having hospice home care services “ the angel nursing network “ desperate families got the nursing care they needed . From bereavement services, to UK repatriation, clergy and so much more – the Sweet Charity Hospice Fund did it’s work throughout the south Costa Blanca.

In the 4 years we were active ( 2004 – 08 ) over 300 families we’re serviced. Due to the stress involved in this endeavor, my health suffered greatly. The resistance to my ways became too much for my soul and body. A mastectomy due to breast cancer in 2007 put an end to my dream. But life went on!

Ever since 3 generations of women have been affected by Spino Cerebellar Ataxia – In 1986 my mother, sister and I took part in the research of Dr. Susan Perlman at the Los Angelos Ataxia Center. We were asked to be a family based study of the Ataxia Diet. The diet study is today the basis for further research into the nutrition of Ataxia patients. This study formed the basis of my personal commitment to finding everyday solutions to living with Ataxia.

Now that I and others have poured time into genetic studies, solutions and hope we are all interested in finding a cure for Ataxia. Being 70 years old – we still don’t have a solution to the issues facing Ataxia. Organizations and charities such as Ataxia UK, the National Ataxia Foundation of Minnesota USA, FARA – USA and FEDES – Spain, have struggled to find treatments and ways to deal with this neurological disease Ataxia. But after more than 50 years of my lifetime searching – we still don’t have a cure.

Maybe it’s time to add a new technologies like Grace the nurse assistant or Robear of RIKEN research of Japan to help with the daily issues of this progressive neurological disease in private homes and elderly care homes. We need to look at every phase of the disease progression . With elderly patients in mind – the Solution Project and I have expressed a willingness to find researchers to help in the search for solutions to the everyday issues facing Ataxia patients. The new technologies are crucial to the future of Ataxia. 🙏

My mother told me a story about the beginnings of Ataxia.

#1 – Ataxia ( which she didn’t know about ) and how her body betrayed her at the age of 13 years old. Her brothers played a nasty trick on her while ice skating. She lost her balance a lot while skating and her brothers left her to get up from the ice all wobbly and out of control of her movements.

# 2 – She always was left sitting by a fire when my father took me and my sister sledding or skiing. Wet and cold slippery surfaces we’re not her thing ! My mother made sure that Southern California and South Florida was the place to live were regional areas of dry and safe walking conditions existed.

#3 – Ataxia being in her life was a hard adjustment. Back then ( 80’s ) the mobility services were limited. But one story of joy sticks out particularly when she lived in Florida . The Disneyland people had her lead the main street parade on a scooter. 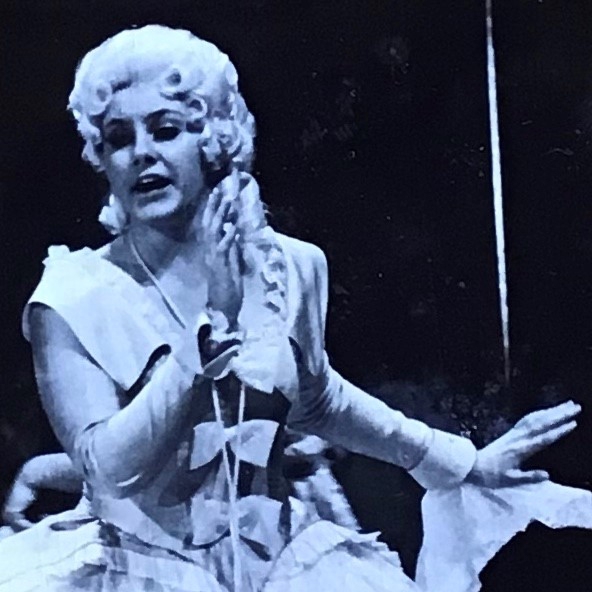 Ataxia – a tale of survival and hope

A Member of the Solution Project

“The doctors stood around my bed as they gave their diagnosis of the neurological tests. They were all unanimous in their decision. They all said I would need to give up my singing contracts and start to retrain for a new profession. But what that should be, they didn’t say. This was a scary pivotal moment in my life. “

A Member of the Solution Project